‘Fringe’ comes from a ‘Fringe of another Festival’ or ‘Fringe Arts’. ‘Fringes’ administer shared risk: not a single pot of money coming from one place to produce a programmed event, it is about support, development, accessibility and everyone involved, including artists, venues, audiences, and funders, investing together in a creative platform and delivering a unique & organic occasion.

Fringe Festivals come in all different shapes and sizes; some are open access (anyone can take part 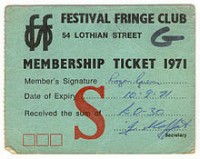 by registering), first come first served, created by lottery, juried, part programmed or a mix of them all.

They are born from passion and hard work; a passion for development, for creating a platform and for seeing and realising new ideas and initiatives. Fringes are exciting sparks where stars are made; they are the ‘excellence’ of the future.

In the city of Edinburgh in 1947 eight theatre groups turned up in uninvited wanting to perform at the (then newly formed) Edinburgh International Festival, an initiative created to celebrate and enrich European cultural life in the wake of the Second World War. Not being part of the official programme of the International festival didn’t stop these performers – they just went ahead and staged their shows anyway. Year on year more and more performers followed their example and in 1958 the Edinburgh Festival Fringe Society was created in response to the success of this growing trend.

Brighton Festival had the same thing happen in 1967 when it began, but it incorporated the ‘open access’ part of the festival within its programme until 2002 when it became the Fringe we know today. Similarly Adelaide Fringe began in the early 1970’s as a reaction to the Adelaide Festival of Arts. The two festivals then went on to join forces and become one.

Since then hundreds of cities have seen the same organic phenomenon of Fringe festivals forming. This booming Festival sector has picked up the pace in recent years as we see more and more new Fringe Festivals begin.

📣 OPEN CALL: Wandsworth Arts Fringe wants you for #WAF2022 happening 10-26 June 2022. Expression Of Interest and WAF Grants of up to £2K are open NOW for live events and digital projects. Find out more at wandsworthfringe.com ... See MoreSee Less