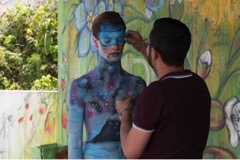 When I was invited to attend the 5th edition of the Azores Fringe Festival in 2017, I immediately said yes. The Azores had been rising in popularity as a tourism destination and I, as an Azorean and a travel blogger writing about sustainable cultural tourism at Tripper (www.tripper.pt), was intrigued. How do you pull off an alternative festival on an island in the middle of the Atlantic Ocean? I had questions about budget, about people’s acceptance of out-of-the-box events, about space (actual physical space) and scale.

Islanders are used to embracing the new and the unexpected, but it takes a certain dose of healthy craziness, perseverance, and stubbornness to put together an event like a Fringe Festival, even before knowing if it will stick around for long. It also takes a lot of love and passion for what you do. But I’m sure this is not new to anyone who is a part of a Fringe Festival or who has been to one.

Terry Costa, the director of MiratecArts that organizes the Azores Fringe Festival (among other cultural events on the islands throughout the year), is a force of nature. He has this never-ending energy and glowing charisma that makes everyone roll up their sleeves and lend a helping hand. And, yet, being on the spotlight is not what matters to him (just to dismiss that myth that all artists are divas). I not only witnessed it, I was part of it. Heck, I felt like I was part of something bigger and I was there for only one weekend.

In a time when everyone seems to be more interested in cracking the right formula for success (and mimicking everyone else’s cookie-cutter model in the process), Fringe Festivals celebrate creativity, originality, uniqueness. Non-conformity is still a dangerous lifestyle. So, imagine standing your ground on a place where you see the same people every day, and half of them are thrilled with the novelty but the other half not so much. And you still go through with the cultural events you planned, adjusting when things go wrong (a skill one masters when living in remote islands like the Azores).

The Azores Fringe Festival in 2017 was one of the events of the year I felt privileged to be a part of, even if I was there just as an observer (and an improvised assistant during an impromptu performance by Terry himself).

I was fortunate to meet and share drinks and meals with artists who are genuine, creative, and giving. Who were on that 171 square miles island for the chance to share their work with a little corner of the world where access to art is limited. Who were buzzing with positive energy.

But do you know what impressed me the most (although being surrounded by all these talented people from different corners of the globe was quite the experience)? How the locals talked to me about the Fringe Festival, showing pride and appreciation for an event that opened their minds (and hearts) to something a little out of the ordinary.